Going Back to Ethiopia - Closing A Circle - Dream big! Dream peace! And work hard to achieve it!!

November 2008, we traveled to Ethiopia to meet our daughter and bring her back to our home in the Pacific Northwest. We are returning to her homeland with her as a three year old and her two brothers, now ten and fourteen. We have a completely different purpose. We want to connect our daughter with her birthright and introduce our boys to the land of their adored little sister. I see evidence of the connection they already have in images like this ID card of my eldest son (from the year his sister came home). Where unbeknownst to me, he added an Ethiopian stamp. We are also fulfilling 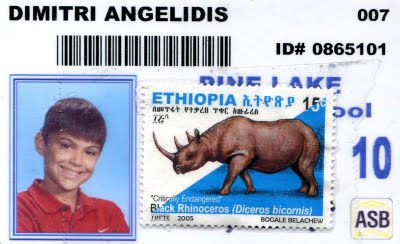 a promise we made to ourselves to help the children of this amazing land.

Our connections to Ethiopia have grown. We connected with Jane Kurtz, a renowned children’s author who grew up in Ethiopia and is a tireless volunteer for Ethiopia Reads. We met Melissa Faye Greene, a award winning journalist who wrote about the challenges in Ethiopia related to AIDS and HIV and is an adoptive mother of 5 including 4 from Ethiopia. We found Yadesa Bojia (or rather he found us on facebook) the artist who designed the African Union flag and himself a shiny example of the possibilities if you fight to overcome the circumstance many Ethiopian children face. The bonus is Yadesa lives in our town.

We are also working with Dana Roskey who lost his Ethiopian fiance in a tragic car accident as part of our efforts to put another Ethiopia Reads library in Addis. He is now fulfilling his fiance's dream of providing education and hope to the children of her ancient country. We are going back thanks to the help of Habtu Tekeba, an Ethiopian travel agent, with some assistance from Jane Kurtz and her brother, is making a better life and future for his family and helping those like us honor our connections. We are also grateful for the chance to honor the man who was instrumental in bringing our daughter safely to us. He is a protector of children and is fighting each day to save one more . . Ato Teklu. We can’t wait to show him how much little Leyla Marie Fasika has grown and flourished since he last saw her.

We were asked to draft the language to put on the plaque for the first Ethiopia Reads library in Bahir Dar -- funded through generous contributions of friends, colleagues, family and perfect strangers. Michael and I wanted it to reflect our hope for Ethiopia and her children as well as our love for our daughter.

This library is for the children of Bahir Dar, birthplace of Leyla Marie Fasika, beloved daughter of Ellenore and Michael Angelidis and cherished sister of Dimitri and Damian Angelidis.

"Once you learn to read, you will be forever free." Frederick B. Douglass. 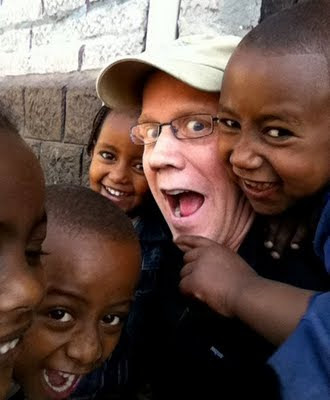 But the more I thought, it didn’t seem enough. I wanted to inspire these children (some shown in the photo above) to see hope for their future and the role reading and education could play in making it more than just a dream. I reached out to Yadesa and asked if he would be willing to help me. Yadesa responded beyond my expectations. He provided a signed African Union flag he designed to adorn the wall of the new library. He gave me posters and copies of a cookbook with his art that was a tribute to the Lucy exhibit he designed in Seattle (which ironically occurred when we were last in Ethiopia). And he committed to visit the children when he is in Ethiopia.

When talking about the flag, he told me, “I ordered another flag and it just arrived. I wasn’t sure what I was going to do with it, honestly. Then you reached out and I knew that was where the flag was meant to be.” I asked if he would also be willing to provide some words to the kids. He wrote a beautiful letter in Amharic for the children of Bahir Dar (translated below for us English speakers).

The great African leader Nelson Mandela once said "Education is a power weapon to change the world."

In today’s world, where science and technology is at its highest peak, you might feel like the lack of school, materials and all the basic necessities around you might keep you from playing a vital role in your country as well as community. But with all the hardship around you, education will help you to win the battle just like Mandela said.

Dear students, with education there is no mountain you can't climb and there is no dream you can't achieve. You are defined not by the poverty and struggle around you but by the effort you put to better yourself.

So I beg you and urge you to seek education to change your future and your country’s future. You are tomorrow’s leaders and your dedication will better it for generations to come. Dream big! Dream peace! And work hard to achieve it!!

From Ethiopia to Seattle, back to Ethiopia, and then back to Seattle and so it goes on - - much has come full circle in 2.5 short years. Yadesa’s words are for all of us: Dream big! Dream peace! And work hard to achieve it!!
Posted by eangeli at 11:21 PM