There are certain questions I get with some frequency since we adopted our daughter. One of those is “Why Ethiopia?” I was recently asked this question again from a prospective adoptive parent on Adoptive Families website. Excerpts from the email I received are below:

“I just wanted to tell you that I have been really inspired reading your blog. . . . When we first began researching adoption (about a year ago), we talked about Ethiopia, but were both so afraid of the unknowns and decided it was not for us; however, I have always felt that it was where we should be. . . .. . Your beautiful story has inspired me and concreted the idea in my mind that we are being called to that country. How did you decide it was right for you?"

The truth is we didn’t originally start thinking about Ethiopia. A number of our friends adopted children from China and a few from Romania and Russia. We wanted to add a little girl to our family since we had two sons. After that our biggest concern was the health of our new child. We were open to a slightly older kid, up to two years of age, given our boys were 6 and 10 at the time we started the process. We began looking into adoption with the thought that China likely was the path for us. We assembled the massive amounts of paperwork and even prepared ourselves for the long wait that was anticipated with China. At the first informational meeting, we saw a family from my son’s elementary school. They were considering Ethiopia. I found it very interesting since I did not know anyone who had adopted from Ethiopia. I did remember learning about Ethiopia from early Bible classes and school. I was intriqued but did not give it much more thought.

We moved forward with China without considering Ethiopian at that point. I remember vividly when I received an email from our adoption agency while we were visiting my husband’s family in Greece that summer. I was sitting under an umbrella being the one in the family most likely to turn an angry shade of red under the hot Mediterranean sun. I feel a sick feeling in the pit of my stomach as I read the message . . another family where one parent had a similar health history as mine had their paperwork rejected by China. We were just getting ready to submit our paperwork. The agency strongly recommended that we consider another program since we would likely be rejected as well. I had not considered, much less prepared myself, for this possibility. I felt the tears sting in my eyes as my husband gently asked me “What’s wrong?”

I believed in my heart that there was a third girl child we were supposed to adopt waiting out there for us. As I let the bitter disappointment go over a period of weeks, I realized she was not in China. And I needed to explore other possibilities. When we returned to the states, I reviewed other countrie's programs and decided to look closely into the Vietnam, Russia and Ethiopia. I interviewed with the leaders of each program at our agency. We decided on move forward on parallel paths with Ethiopia and Vietnam given that Vietnam had many question marks and Ethiopia was still a pioneer program for our agency. We started our Ethiopian paperwork and then never did much with Vietnam. The more I learned about Ethiopia generally and through our process, the more peace I had with our decision.

As we explained this change in plans to our boys, my eldest said with complete candor something I could not even say to myself, “They won’t give you a baby because they think you are going to die.” Wow – that one hit me right at the very core of my being. I knew he was right but hearing it out loud was another thing altogether. Somehow, hearing him say it with the tone of total indignation at the injustice of it was a small comfort. Having your children want to protect and defend you is a special thing indeed – although it felt bittersweet given the circumstances.

Ethiopia has a long and rich history as one of the ancient countries. We found many similarities to my husband’s Greek culture: the climate, the traditions, the food and the focus on family and community. When we traveled to Ethiopia, we felt welcomed and very much at home. The foliage and vegetation reminded us both of my husband’s homeland. Here is a picture of our time in Ethiopia getting to know our new daughter. 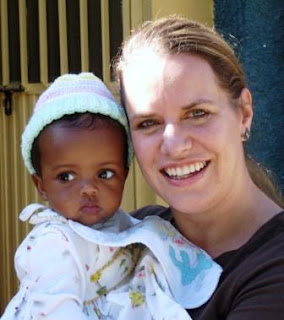 I believe you receive the children you are meant to have no matter how they come to join your family. Our daughter is no exception. She is so completely one of us while also being completely Ethiopian and uniquely her own person. What seemed like a devastating piece of news at the time put us on a path to amazing joy. As my eldest son will guilelessly say (and does so with almost annoying frequency), “I am so glad China did not work out otherwise we would not have gotten Leyla.”

I saw this recent quote which spoke to me: "When you learn something from people, or from a culture, you accept it as a gift, and it is your lifelong commitment to preserve it and build on it."--Yo-Yo Ma, American cellist

I feel this applies exponentially when you accept the gift of a child from another people and culture. My youngest son asked me, “Are we Ethiopian now?” I answered, “No one will look at you and see Ethiopian but you are Ethiopian inside if you accept that connection to your sister’s homeland.” He said, “Good.” He doesn’t give me as much insight into what happens inside his head but clearly he viewed being able to connect with his sister’s country as a positive.

The answer to “Why Ethiopia?” is simple: because that is where our daughter was waiting for us. And we accept the lifelong responsibility to honor the gift we have gotten by way of Eastern Africa. Here is a picture of the family recently celebrating Leyla's second birthday at a local Ethiopian restaurant. 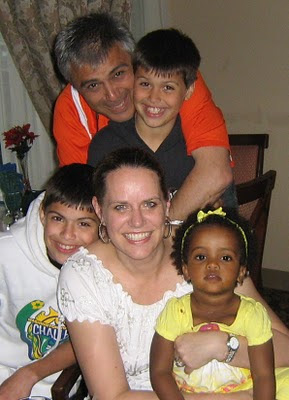