what's in a name

Choosing a name for your child is usually a momentous and often challenging task. When you adopt a child you add a few additional dimensions. These dimensions increase further if your child is from another country and culture. When we choose our eldest son's name, we chose a name we both loved. Some of our original criteria were: 1) the name needed to be of a saint so my son could celebrate his nameday (a Greek tradition to celebrate rather than birthday), 2) the name should be unique but not strange, and 3) the name could not have an easy nickname. (Incidently, my husband has made the most of being a Greek in American and is the only one in the family who celebrates both his birthday and nameday.) We had to work through some cultural issues with my husband's family since Greeks generally name the first born son after the father's father. My father in law's name is Orestes which didn't seem quite right for a child who would be American by birth and Dutch and Greek by lineage. Also, in mythology Orestes kills his mother - not a plus from my perspective.

We chose Dimitri from Demeter, the goddess of nature and the earth. We gave him Orestes as a middle names which led to him having the rather unfortunate initials of DOA which he now embraces as a teenager. One of my best friends who lives in Holland called me when I was pregnant and told me she had the perfect name for me, Dimitri. I laughed and told her we already chose that very name but it gave me confidence we had chosen well. Dimitri is also the patron saint of my husband's hometown of Thessaloni and the name of his godfather's father. All convinced me Dimitri was the name of destiny for our first born pictured below communing with nature after he was told not to since he was recovering from a severely broken arm but apparently the call was too strong to resist. 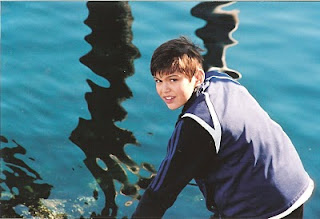 With our second son, the name did not come as easily although the criteria was generally same except we decided we wanted another name that started with a "d". We settled on Damian Michael (his dad's name). You will see a theme with the middle names; they are all connected to my husband's family. No "drama" on the Greek side for this name since the second son "was supposed" to be named after my father. My folks, who are Dutch, have similar naming traditions (I am named after my pateral grandmother but ironically look like my materal grandmother's side of the family - go figure) but they did not express any opinion on how we named our children. Damian means to tame. And if you met him, you would not think "tame." He has boundless energy and curiosity and often combines the two. We feel like the ones being tamed in most instances. Below is a picture of the tamer dancing to the beat of his own drum - literally. 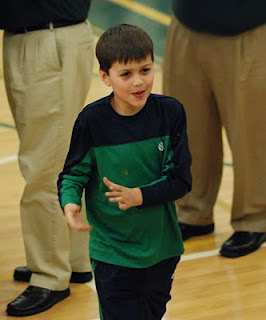 With our daughter Leyla, it was a family affair. We received her referral picture and had the advantage of seeing what she looked like before we named her. Our criteria varied a bit this time. My husband Michael wanted something that meant "a gift from god." Her birthmother gave her the name Fasika which means Easter and we wanted her to retain that gift. My husband also wanted to name her after his mother Maria. We all wanted an Amharic name to honor her Ethiopian heritage. The boys wanted a name that fit a princess which we all felt she looked like in that first photo. We faced a few challenges with the nameday but use her middle name for Greek holiday purposes. We worked through many possibilities before settling on a three name combination. Adding two opinionated brothers definitely lengthed the vetting process.

Although Dimitri and Damian's favorites didn't make the final cut, both threw themselves into the process and enjoyed learning more about the meaning of different names. We chose Leyla which means "dark haired beauty", Marie for Michael's mother (and a saint) and Fasika for her birthmother. We learned later that Leyla can also mean "change" which is fitting for many different reasons. We call her every combination from using all three, to Leyla Marie or Fasikie, or just Marie. She beams at all but has a hard time herself with saying Fasika. She often refers to herself in the third person as "is Leyla" or "Leyla did it," the later usually when she had done something she shouldn't. Here is a picture of our dark haired beauty from her early months home. 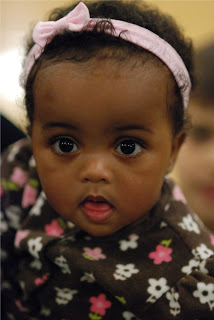 It is interesting to note the Greek connection to the naming of Leyla's homeland. The name "Ethiopia" derives from the Greek ethio, meaning "burned" and pia, meaning "face": the land of burned-faced peoples. Aeschylus described Ethiopia as a "land far off, a nation of black men." Homer depicted Ethiopians as pious and favored by the gods. In Ethiopia's naming tradition, the children take their father's first name as their last name. The first name is usually given by their parents and is significant in meaning to them. On Leyla's visa back to the states as well as her Ethiopian passport, her name was listed as Fasika Michael. My husband Michael enjoyed that quite a bit.

This custom is used to make it easier to identify family groups. Our family group shares a last name, an adverturous spirit while each is a unique and quirky individual. A family friend who had not seen Leyla for bit recently ran into the five of us at one of the boy's many soccer games. She commented as she watched Leyla run, play and laugh out loud as she amused herself (see below), "She is such an Angelidis!!" Well said. 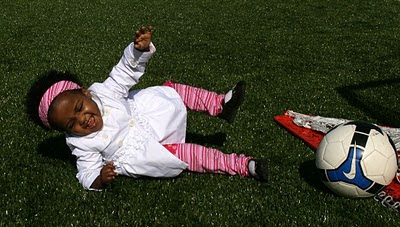