On May 27, 2008, a little baby girl was born in Bahir Dar, Ethiopia. We would see her face for the first time 4 months later in our referral picture. Our lives were forever altered when we met her at six months old in person in Addis Ababa. Much change occured in three short years. She is no longer a tiny infant with huge eyes silently taking in the world. Now she is a feisty, chatty, take the world by the tail, adorable pre-schooler. She owns the heart of each member of the family with her fierce, joyful nature. We celebrated her full third year of life with a delicious Ethiopian dinner at a great eatery named Kokeb . Kokeb means star in Amharic, a literal translations would be "Star Restaurant". Leyla is definitely the "star" in our family, pictured below. Leyla apparently was not in the mood to flash her trademark smile. Having a long Memorial Day weekend to spend with the family is heavenly in the hustle and bustle of life with two working parents and three active kids. 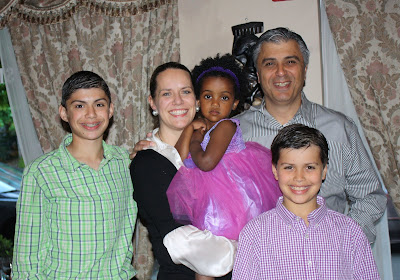 If Leyla were still living in Ethiopia, she would likely be celebrating a different national holiday. They commemorate May 28, 1991 when the Ethiopian People's Revolutionary Democratic Front, a united coalition of insurgent factions, took over Addis Ababa signaling the downfall of the Derg regime. I realized that year was significant to us too. In 1991, Michael and I married. And later that year I entered law school.

In Ethiopia, the Marxist Derg seized control throwing out Haile Selassie I, the previous Emperor from 1930 to 1974, beginning a civil war that lasted from 1974 to 1991. It is reported many thousands were killed during campaigns against ethnic groups in rural areas. The Derg regime is considered by many as responsible for among the worst human rights abuses during its seventeen years in power. Today, many participate in parades and popular demonstrations in larger Ethiopian towns and cities to celebrate their downfall. The celebrations are designed to be a reminder of the humanity and equality of all peoples.

As we get ready to travel back to Ethiopia, we look forward to seeing and learning more about this amazing country. We are excited to see the new Ethiopia Reads Library in Bahir Dar giving children from Leyla’s hometown the chance to read, thanks to generous donations from family, friends and even strangers. We were asked what we would like on the commorative plate. I gave it some deep thought because we wanted it to reflect so much: our gratitude to Ethiopia, our hope for its children, our desire for our daughter to be at home in her birth country as well as our deep and abiding love for her. We settled on:

This library is for the children of Bahir Dar, birthplace of Leyla Marie Fasika, beloved daughter of Ellenore and Michael Angelidis and cherished sister of Dimitri and Damian Angelidis.

"Once you learn to read, you will be forever free." Frederick B. Douglass.

Pictures of the school that will house the library and the children who will read the books are below. We can’t wait to meet them this summer. 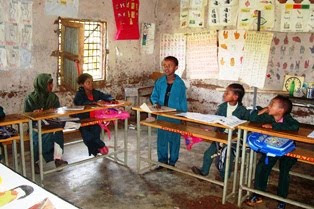 But there is always more to do . . so much need. We are now working on funding for a second library in Addis, Ababa. We are approximately a third of the way there. Damian and I are planning a bake sale here in Seattle. If you are in the neighborhood, enjoy some delicious goodies and help out a good cause. We are calling it . . “Baking for books.” I you are in a position to help, you can also donate on-line or contact me for information if you want to send a check.

All children should have the opportunity to learn to read and to be forever free. This weekend, we joyously celebrate with Ethiopia the equality of all people.
Posted by eangeli at 3:01 PM