Bahir Dar, Ethiopia is just a short plane ride from the capital city of Addis Ababa. But it is a world away in many other respects. We were excited to visit Leyla’s birthplace and the site of our first "Leyla Library" through Ethiopia Reads housed in a school named “Yejatit (February) 23” which is V-day,"Victory of Adwa," for Africa (the actual celebration day March 2). Bahir Dar is a small city nestled at the foot of Lake Tana – the third largest lake in Africa. There is abundant and varied bird species flourishing by the water. The foliage is tropical and beautifully green wherever you look unlike the arid, mountainous climate of Addis.

We arrived early in the morning. And as seemed the norm, there was some confusion over the plan. We thought we were visiting our library at 9 a.m. but our guide said noon. Michael called our Tesfa (which fittingly means "hope" in Amharic) representative and confirmed the original time was correct. We stopped briefly at our hotel to freshen up and then headed to the school. I felt butterflies of anticipation dancing in my middle.

As we entered the gate into an open courtyard, we were greeted with clapping and cheering by a welcoming procession of kids and adults holding bouquets of freshly picked flowers. We were treated as visiting dignitaries. Michael was the most comfortable with this attention, shaking hands with each person looking them straight in the eye as he greeted them. Dimitri remarked that he wished he could be more like that too. We were brought into a small room with a long narrow table. Only the adults joined us. There was a solemnity to the occasion even as Leyla, obvious to it, flitted and skipped around the table, presenting an incongruous contrast.

We presented the plaque dedicating the library to our daughter and exchanged pleasantries for a bit. Then the head mistress pointed to one gentleman and said he was to give a speech. His voice was soft but resonated as he spoke from his notes but obviously also from his heart. He spoke of the children and the opportunity the library within this school represented. After he finished, each of the adults seated around the table added their own words of gratitude and stressed the importance of the access to books and an education to provide hope to the children this school served which include 2000 youngsters, a number of whom had the additional challenge of being hearing impaired.

I felt tears well up in my eyes as I listened. I felt unworthy of such high accolades. We raised money but they were doing the difficult hands on, day to day work of molding young lives under the most challenging of circumstances with limited resources. I also was filled with a sense of how much one library, funded by many in a different part of the world, had the potential to bring about true change in this community and beyond. To my core, I was humbled. I felt the weight of responsibility to do more to be worthy of a fraction of the high praise freely bestowed on us this day.

After the speeches concluded, a silence hung comfortably in the air as we were left to our thoughts while we waited for the librarian to arrive. After a few moments, there was word she was coming and we headed outside. The head mistress explained to me as we walked slowly across the dirt field navigating the rocks and high weeds to the library building that the librarian was a former student of hers. She beamed with pride as she spoke of her pupil turned colleague. You can see her beautiful smile in this picture as she laughs with Leyla and me. 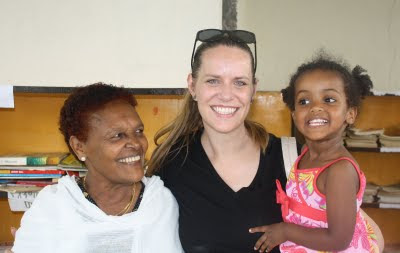 The library building was an small, unassuming rectangular brick building. But for this school, it was a huge and valued new asset. It represents hope for raising the level of education and ambition to succeed among their youth. Our funding would provide the books, the shelves, and reading areas to transform it from an open space with a couple tables and a few piles of books into a working library. The librarian and school officials would ensure it was incorporated into the school curriculum.

As my boys, ten and fourteen, walked around the small room, I could see on their faces they were comparing this modest room to the libraries they are accustomed to in their schools back home. Even fully furnished with a complete set of books, it would be a far cry from what they took for granted. We did get a sense of how small the world has become when my ten year old delightedly discovered a dusty copy of his favorite Harry Potter book from the series among the small piles that sat on sparse shelves. Our family, with a number of the school officials in front of the library building, are pictured below. 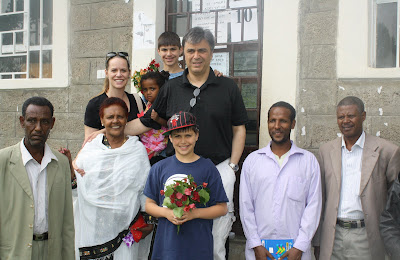 By the time school resumes in the fall for the students fortunate enough to attend, this first "Leyla Library" will be ready to welcome them. For all those who contributed financially, by joining our cause, or with words of encouragement, rest assured you made a different in the lives of these 2000 kids. They in turn will touch many others as the amazing effect of adding hope and possibility in the lives of the young ripples out from Bahir Dar, Ethiopia back into the world.
Posted by eangeli at 8:36 AM