Providing Tesfa – Hope – in Ethiopia and Beyond

When I started this blog and named it “ethiopian ties”, I was thinking of the ties we had to that East African country through adopting our daughter. As I have blogged since, those ties multiplied in many wonderful and unexpected ways. Our library planting in particular opened up our lives to people who amaze and inspire me . . .each with their own tie to Ethiopia.

Since we completed funding for our Bahir Dar Library, we are now working on funding for one in Addis Ababa. Jane Kurtz of Ethiopia Reads introduced us to Dana Roskey of the Tesfa (Amharic for hope) Foundation who is working to provide elementary education to parts of Ethiopia in desperate need of this hope. One of his schools is in the poorest part of Addis – Mercado.

When we were in Ethiopia this summer, we were fortunate to attend the Mercado kindergarten class graduation. Dana explained a bit about the area and the school as our driver struggled to navigate the dirt roads filled with pot holes and people on our way to the school . Dana joked he had chosen a challenging vocation for someone who easily gets motion sickness. The evidence of extreme poverty was palpable and everywhere I looked. But so was the optimism of the children – laughing and playing in the streets. Their faces were open and curious as we passed. And they warmed with a welcome smile and a twinkle in their eyes if we looked directly their way.

The graduation ceremony was the epitome of the joy that comes with hope. The parents were sitting expectantly – dressed in their best and crowded into the small rooms. The kids and I can be seen in the back of the room soaking it all in as Michael was our photo journalist. 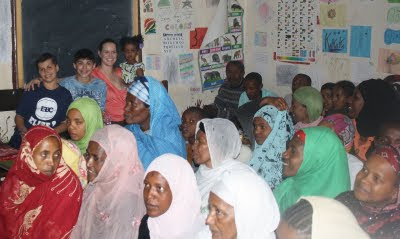 The children came in cap and gown. At five years of age, I found this a particularly poignant sight. I could see in my mind their older versions in similar graduations as this education will likely change the course of their lives. 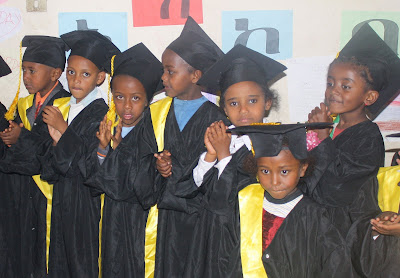 Dana stands out in this room. A tall lanky " ferenge" (a white foreigner in Amharic) as he refers to himself. He gives off an amazing positive energy while also coming across as completely laid back. He shakes hands with each student looking them directly in the eye. I could feel the pride and genuine fulfillment these children’s milestone provide to Dana. 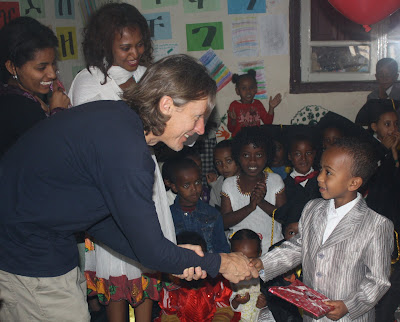 But lurking there is also lingering sadness. Dana’s fiancé, Leeza, (Fregenet Woubshet), a 29-year-old American citizen of Ethiopian origin, was tragically killed in a car accident seven years earlier. His response to this unbearable loss was to take on the cause of fulfilling her dream to serve the children in her native land. His Tesfa Foundation has done just that -- opening seven schools in those seven years.

But I was also interested in the person. And what drove him in his mission of hope. Meeting Dana and spending time with him gave me a sense but I wanted to know more. I learned that he also blogged. Feeling a bit like an intruder in his personal thoughts and experiences, I read through a number of his entries one evening, into the wee hours when the house is quiet. I was humbled in so many ways. Our family is giving back because of the tremendous gift that came into our lives through our daughter. Our efforts multiple our joy as we have the opportunity to aid children like her in her native land.

His efforts were born out of tragedy. And he faces constant painful reminders. Even as he brings positive change to her world, he can’t share it in the same way he could if she were still physically here. My eyes filled with tears and rolled down my cheeks as I read his words, especially those written around the difficult anniversaries. (I learned there we had been with Dana in Ethiopia during the last anniversary week.) And I pondered – what could have been versus what is - so bittersweet. The tesfa phoenix rises for so many children out of the ashes of heartbreak. I find my eyes filling again with those tears as I write.

From my vantage point, the youngsters who attend his schools are now his children. And his relentless focus and drive, he does for them, for her, for Ethiopia, and for himself. We are honored to be able to bring a library to one of his schools and do our part to honor her, to support him and to spread hope in a country that gave us such an amazing gift. One more ethiopian tie is formed.
Posted by eangeli at 10:49 PM