Ethiopian Ties Continue to Ripple Between Seattle and Ethiopia.

As I am reviewing the results of last year’s event, I am left wondering how did it all come together so beautifully. I just sent out the thank you cards to many supporters letting them know they had done the unimaginable – raised almost double what we thought was an audacious goal for a first time event. (I found everything takes longer when the entire organization is supported by volunteers if you are wondering why "thank yous" for a December gala are going out in April.) 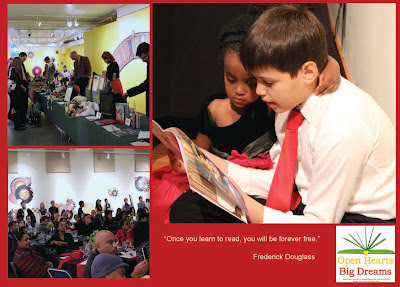 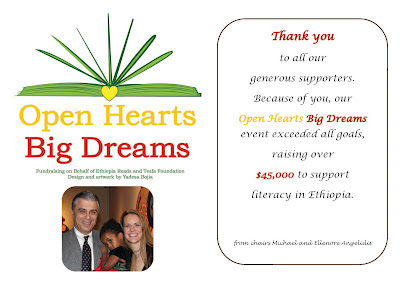 For me, the picture of two of my children captured our objectives perfectly. They are sitting at the bottom of the podium where a live auction is proceeding around them supporting literacy half a world away. The power of a book has drawn them in. The little hand of the Ethiopian/American girl clutches tightly her Dutch/Greek/American big brother’s neck as he gives voice to the words she cannot yet read. Both of them are completely transported outside of that room and into the story. The event was about reading, dreaming, providing opportunity, coming together, and celebrating .. . I felt all in the air that night.

The seed was planted when I first met Yadesa Boija, an Ethiopian artist. I asked him for a letter and something to bring to the Bahir Dar library (our first Ethiopia Reads effort) in Leyla’s birth town. He suggested a African Union flag which bore his winning design and his signature. I asked him to also include some inspiring words from someone who had walked their path in a letter to be read to the children. He said as we were parting, “You should do something in Seattle. If you do, I will help you.” For some reason, this idea, which I had not considered before, seemed like something I was supposed to do.

As we planned late last fall (this year I am starting much earlier!), pictures arrived from the the Mercado School and Bahir Dar library. The flag is seen hanging proudly in front in Mercado with the children’s excitement radiating outward. In Bahir Dar, a teacher is reading Yadesa’s letter to a class of children with his flag suspended between two more in the background. They are amazing images for me -- magical even. 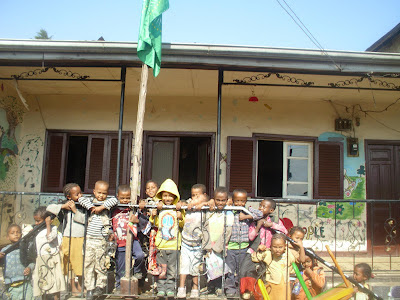 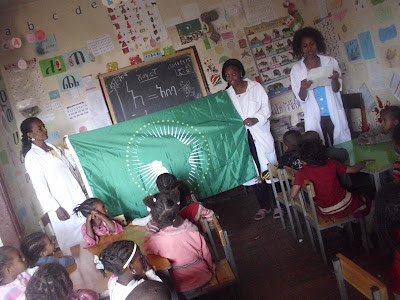 I was happy to share these touching images. Yadesa had not gotten to visit the library as my family had in the summer and seen the joy and hope it brought to that community. His response was immediate and enthusiastic – “You made my day!” Yadesa is a shining example of how to make a difference in whatever unique way best suits you – encouraging and inspiring, providing a bit of yourself through your talents, or collaborating.

These children were evidence of ripples caused by taking a step forward in faith – first from Ethiopia - Yadesa and Leyla’s birthplace -- to Seattle where both families live now. Then the ripple reversed and headed back to Ethiopia through Yadesa’s words and art to the neighborhood of his childhood and to the first "Leyla’s Library" in her hometown (funded by our friends and family). These children and their teachers returned ripple back to us in Seattle through the wonder of photography and the internet. With the literacy program funded through this event and continued support of Ethiopia Reads, we look forward enabling those ripples to ebb and flow between Seattle and Ethiopia -- gaining momentum and energizing more and bigger dreams with each return.

Another strong believer in the ripple effect, Jane Kurtz, one of the founders and a tireless volunteer for Ethiopia Reads, relayed a story Yadesa shared about his early years growing up in Mercado (which means market). He accompanied an older brother to check out books at a library. When he asked to do the same, he was told could not because he was too young. He then sat in front of the building and said he was going to stay there until they let him check out a book. Finally, they relented after seeing this young boy was as good as his word.

Through Yadesa's sharing - whether his history, his paintings, or his words -- he gives life to ideas about the power of education, collaboration, art and reading to open hearts and facilitate big dreams.

He, along with many others, are helping us and Ethiopia Reads give more boys and girls the opportunity to do the same. As the logo designed by Yadesa so beautifully illustrates – open books + open hearts = big dreams.

I recently saw a great quote I thought summed up how we (which included volunteers, supporters and attendees) pulled off an amazingly successful first event:

“Believe and act as if it were impossible to fail."

We are taking that approach again this year . .stay tuned.
Posted by eangeli at 9:55 AM