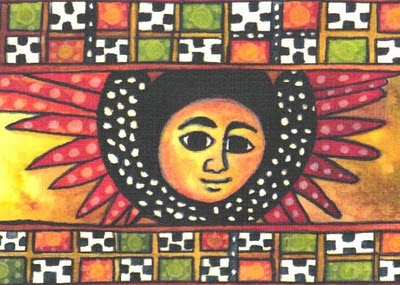 Adopting from Ethiopia connected us forever to East Africa. However, it was up to us what that connection would look like. When I first started blogging here as an effort to give back, I researched many things Ethiopian. I came across Ethiopia Reads, a charity focused on building libraries in the founder's home country, which I mentioned in an early blog. With a few months, I put together a couple boxes of books and sent them to their office. When I did so, I discovered an interesting connection. Their US office is not far from my parent's home in Denver where I grew up. I received a lovely thank you note. The Reading Angel picture above was on the cover along with this story inside.

“The Reading Angel depicted on this card is one of the hundreds painted on the ceiling of the Church of Debre Birhan Selassie in Gondar, Ethiopia. Built in the 17th Century, it is the only churches remaining after the city was invaded in 1888. It is said that a swarm of bees descended on the soldiers as they attached the church compound and that the Archangel Michael stood before the large wooden gates with his flaming sword drawn. It is considered one of the most significant churches in Ethiopia.”

The story provided another connection. My husband is named after this Archangel and my second son's middle name is Michael.

To add some Ethiopian themes to our children's book collection for our daughter, I searched on Amazon.com. I found amazing books by Jane Kurtz. She was born in the Pacific Northwest where we now live. Two of our favorites are “Fire on the Mountain” and “Trouble.” She grew up in Ethiopia and her amazing books gave our family a richer view of a very different experience that is now part of our family. Late last year, I found her on facebook and sent her a note of thanks and asked if we could connect.

On that same day in December, I saw Ethiopia Reads again and browsed their website more deeply. I saw on their "how you can help" page opportunities to raise money for a library in a school. I was intrigued. My parents and my husband are teachers. We believe strongly in the transformative power of reading. This opportunity appealed to us. I sent an email to get more information about raising funds for a library. I received a wonderful response back from Jane Kurtz. Turns out she is leading the library planting effort. She commented on received both my requests through facebook and Ethiopia Reads on the same day. And she mentioned her fascination with all the ways we are interconnected. After our discussions, we decided to move forward with the library.

I reached out via facebook causes as well as directly to many family and friends – you see it at the top of the blog. The response was amazing. One friend and his wife showed their support with a much larger than expected gift and a note "for Leyla's library." I was so touched. I felt tears fill my eyes at the simplicity and beauty of the note. "Leyla's Library" now seemed so much closer. A senior executive I worked with some years ago sent in a large contribution. In his enthusiatic response to our efforts, I also learned about his similar work in his homeland. Many others helped in smaller ways. Some surprised me: my yoga teacher, friends of my teenage son, people I had lost contact with but still had their email in my system. One of those friends shared her story. She was one of the founders the Young Women’s Leadership Charter School which serves “at risk” girls in urban Chicago. Oprah modeled her girl school in Africa after that one. I never knew any of this but I was inspired to hear it. I also heard from people I didn't know at all including an Italian family who had similarly adopted an Ethiopian daughter. The connections were building and stretching different directions.

In a few short months, we are close to having the funds for the first library which will bear our daughter’s name. Given the tremendous support and gaping need, we plan to begin work on fundraising for a second. We are starting fulfill the promise we made to ourselves and to our baby daughter to help in the land of her birth. Our connections are becoming stronger and more defined. And Leyla (our little sunshine angel seen below at 15 months) will have a place there she can truly call her own. 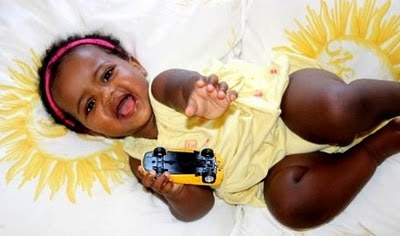