The Gift of Possibility

As a mom, and even more so as an adoptive mom, I worry, many times needlessly. We knew development delays, and some issues we aren't familiar with in the U.S., are the norm for children adopted internationally. The doctors told us we were fortunate that Leyla came to us as an infant. When she was first home, we needed to get her tested her for TB. I remember learning about TB in school but my recollection was TB was a disease from the past except for a rare case. Not so for many parts of the world I learned now. Fortunately, the results were negative.

We also had her tested for an intestinal issue. Eighty percent of Ethiopian children have it so we were not surprised when the results were positive. To resolve the issue, we needed to administer a onetime dose of medicine. It sounded simpler than it turned out. Leyla had an amazing gag reflex. When the medicine hit the back of the throat, she projected it back out. After trying multiple times, we gave up and called in reinforcements. It is sad, but it was somewhat gratifying for me to see the nurses in her doctor’s office struggle too. They ultimately had success. I then got an unexpected call from the health department because this intestinal issue isn’t common here. It was a reminder of how far she had come.

During one of our early doctor's visits, we received some troubling news. Her head was growing disproportionally fast compared to the rest of her body. The doctor did not seem overly concerned since proportions of African children are different than those in the Americas. This was news to me. I expected proportions to the be the same everywhere. We had the option of having an ultra sound of her brain through her fontanelle. This brought back memories of shortly after the birth of my first son. His fontanelle was completely open rather just the ordinary small triangle in the front. At that time, we were also offered an ultrasound of his brain. For him, they had large access since there was little bone getting in the way. In each case, we chose to have the ultrasound and the ultimate news was good. But for the period between learning our child may have a significant medical challenge and when they told us everything was fine - time stood horribly still. In that stillness, we did some serious worrying and praying.

We recently needed to complete a family report as part of our adoption follow up. I got the chance to review doctor’s notes of her most recent check up which I normally wouldn't have seen because they are not shared. Our regular physician was sick and I met his partner for the first time, a preeminent adoption specialist. (I included a link on the right side of the blog.) Leyla was just two. When the doctor walked in to the exam room, Leyla began explaining to her that the baby was crying in the other room because he was sad. And he was sad, “because he wanted his daddy.” The doctor laughed and expressed some amazement at her communication skills.

She demonstrated them again to the nurse who was giving her the age appropriate vaccinations shots. The nurse administered the first shot into one of Leyla’s chubby thighs. Then Leyla emphatically pulled her pant leg down. She pointed her little finger in the nurse’s direction and said, “You all done!!” As we concluded the visit, the doctor expressed how pleased she was with Leyla’s development and joked that she could see her as a CEO one day. I remember driving home and feeling the amazing release of the early worry about her development. I could now let myself see her life stretching ahead of her full of promise.

We joke that our biggest concern may keeping up with her. She is a bundle of energy and will power. I often get tears of happiness in my eyes where I hear her singing all the words to the songs on the radio which she does with regularity. She lets her brother know when she is unhappy with them by ordering them to “go sit on the stairs” - our time out place. And follows that with "Come here and give me a kiss" and then lavishes them with hugs and says “I love you so-o much.” She is beautifully full of life and potential. Here is a recent picture of her proudly showing off the spongebob slippers her brother Damian bought her for Christmas. 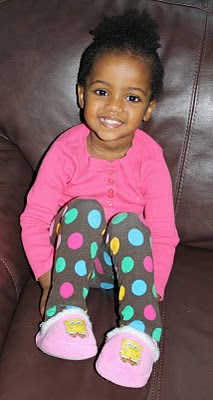