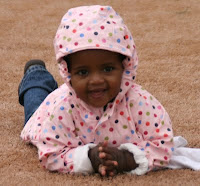 A friend asked me recently what Leyla’s future would likely been if she had remained in Ethiopia. There is no easy answer because you never know the path she would have taken. Looking at her now pictured here in her full raingear happily posing at one of her brother’s soccer games, it is hard to imagine her any other way. But if you look at the circumstance of so many children in Ethiopia today as an indicator, her chances for getting adequate nutrition or reaching a ripe old age were not good. Basic education, medical care, things we often take for granted, would not have been readily available. In Ethiopia today, there are literally millions of orphans who have lost both parents to starvation, HIV and other communicable diseases. One statistic I saw that struck me - there is one doctor for every 250,000 children.

A few weekends back, we attended a fundraiser for a local Ethiopian charity, Blue Nile Children’s Organization (link is included on the right). Blue Nile is working to address the basic needs of some of these children through sponsorship and to address some of the medical needs through building a local clinic. At this fundraiser, delicious Ethiopian fare was served while we were entertained with Ethiopian music and dance – reminding us of the beauty and depth of the Ethiopian culture.

At one point during the evening, an Ethiopian young man of 18 came up to read his poem about Ethiopia. He captured in words the harsh reality of life for too many of Ethiopia’s children. He provided a much more graphic and detailed answer to my friend’s question. His poem moved my husband and I to tears with both its eloquence and heartbreaking details. I hope it moves you too.

Slender skeletons shimmyshakin' dust from the clutch of an empty hut.
Little girls braiding imagination from their feet to their hairlines.
A place where you would see a child thumbsucking 13 months of sunshine from empty skylines
Whose blooming blue veins resemble the blooming Blue Nile.
How can we not provide for those who ask for so little?
When we constantly beg for so much.

With sun-kissed skin,
So much laughter you thought they carried the wind.
And just enough God in their smiles to baptize your sins.
If it is joy we are after then the tragic and comic communicate through laughter.
This be an ode to thee
Dream that tucks itself in the riverbedsheets of the Blue Nile.

And the contortionist orphans,
Fitting dreams into time capsules,
That were never intended to shed sand.

Children.
In the crevices of back alleys roams the frequencies of an orphan's lullaby that imprints marathon footprints marching for the distance.

Children.
Collecting postage stamps in tin buckets.
So, they can throw love letters down the throat of a dormant God who does not wish to respond.

A young child so dark and tall you'd mistake him for Hakeem.
His 'Dream' is not the NBA but food the next day.
And with a body worn-out and broken like a promise
His eyelashes outstretch like arms waiting to grasp the world
As if to say, 'Examine the archaeological remains.'

Cuz with an ongoing civil war that is far from civil
Lucy is not the only skeleton dug into barren soil to be examined with a chisel.
So while newscaster's mundane small talk brush over narratives of death in Africa's East
A child circumscribes city less planes with eulogies.

The God Forgotten Land that had the most humble stake in her rigidly loose faith
Mothered her firstborn with absolutely no mistakes.
A name once extended to the entire African Plane
The Land of the Burntface;

Ethiopia: the first place a child was ever raised.

The first ground a human being laughed, ate, wept, slept, and prayed.
The only nation in the world that resembles a crooked heart try'na to skip itself to the nearest body of water.

So Forget: American Express.
Ethiopia: 'Never leave home without it.'
Posted by eangeli at 3:21 PM