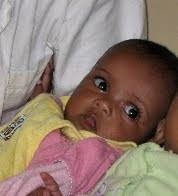 My sons both had different reactions to the idea of adopting a little sister from Ethiopia. The first who was eleven at the time was quite excited. He liked the idea of being a “diverse” family. He thought it made us all “more interesting.” My younger son, seven at the time, had questions. “Weren’t families supposed to look like each other? She wouldn’t look like us, would she?” I asked him if I looked like his dad or his brother. He said “No” quite candidly since my sons bear a strong resemblance to their Greek dad and little to me. He seemed satisfied with that answer. We did not discuss it further until we received the referral picture of his sister. It was amazing – she looked like he did as a baby. Even he saw the similarities and lots of other people commented on it. Within a few days, he proudly had that picture of her on his desk. He asked special permission from his second grade teacher to keep it there until his sister came home. It amazed me how his questions had been answered in such an unexpected way. His sister, pictured here while she was still in Ethiopia, both looked like him and did not look like him.

This journey through Ethiopia to expand our family has had so many interesting connections and learning and they continue. As I was looking for ways to give back, I came across the Ethiopia Reads organization. Their link is included on the side of my blog. I wanted to learn more and found the biography of the gentleman who started the program, an Ethiopian who fled his country but then returned. I learned that the organization is based in Denver where I grew up – another connection. I have included a write up about the founder. His way of giving back is somewhat unique. In a country with disease and famine as significant issues, he has focused on providing food for the mind – something just as important. We are collecting books around our house to send to his libraries. If you have extra books lying around, you might consider doing the same.

Denver, CO -- Yohannes Gebregeorgis, a native of Ethiopia and children's literacy advocate, has been named a Top 10 Hero of the Year by CNN. . . . .
A former political refugee who worked as a librarian at San Francisco Public Library, Mr. Gebregeorgis is the co-founder of Ethiopia Reads, a non-profit organization that works to create a reading culture in Ethiopia by connecting children with books. In a country where 99% of schools have no libraries, Mr. Gebregeorgis and Ethiopia Reads are improving lives, one book at a time.

. . . . Growing up in rural Ethiopia with very little access to books, Gebregeorgis was 19 years old the first time he picked up a book for pleasure. This experience went on to shape his life as a literacy advocate, children's book author, and co-founder of Ethiopia Reads, a non-profit organization based in Denver, CO and Addis Ababa, Ethiopia.. . .

In 2002, Gebregeorgis left his job in San Francisco and returned to Ethiopia. With 15,000 books donated by the San Francisco Children's Library, he opened a children's library on the first floor of his Addis Ababa home. The library was so deluged by children that it soon required the addition of two large tents.

Today, Shola Children's Library records an average of 60,000 visits per year. Additionally, Ethiopia Reads is planting libraries in public schools across Addis Ababa and Awassa at the rate of one per month. Ethiopia Reads has published six bi-lingual story books for children.

Gebregeorgis lives in Addis Ababa, Ethiopia, where he serves as the Executive Director of Ethiopia Reads.
Posted by eangeli at 10:27 PM