Ten years ago on my birthday, our little Leyla, not so little any more, joined our family in Seattle.  I have been documenting this day with a blog post since she was two. I missed last year when my dad died because I couldn’t find words or thoughts to coherently share.


Ten years is so long and yet so short.  Our daughter is becoming a young lady – although she would like to stay a kid, according to her.


Her impact on our family is HUGE.  She is a beloved little sister and daughter who has special a relationship with each of us.  She completed our family in ways that is nearly impossible to fully capture.


Her impact on our community is big. She advocates for kids who need a voice and is quick to point out an injustice or the lack of diversity when she sees it. She sets an example for kids and grown ups alike to do something to improve things from where they are now.


Her impact in the world is beginning.  Since she was three and discovered many kids in her birthcountry don’t get the chance to go to school or read, she has been involved in making the appeal at Open Hearts Big Dreams event which has since become it’s own not for profit.  In her words as a little girl, “That’s not fair and we need to fix it.”  When she was seven, she started writing her own talk and said she just need a “Coach.”  I wanted to share her 2018 words with you here:


Hello. SehLAHM.  My name is Leyla Marie Fasika Angelidis and I recently won a reading award which had the quote “Reading is Dreaming with Your Eyes Open.”  Our Ready Set Go Books let me to dream my way to the Rift Valley where 23 types of flamingos can only be found there.  They helped me learn the secret of the Happiest Herder and trick the Runaway Injera.


In Ethiopia, some kids don’t get the chance to learn to read.  I view this problem as a big lion or AHNbehssah.  But as an Ethiopian proverb says, “If spider united, they can tie up a lion.” So, if we unite, like the spiders, we can tie up this lion and give all kids the chance to dream with their eyes open.  Thank you; AHmahsayguhNAHloh.


She practiced a lot and wanted to get everything just right. Last year she didn’t do exactly what she had planned.  She was sorely disappointed although everyone assured her she had done a great job.  This time she delivered for the audience again and  this time also for herself.  She was particularly proud that she correctly including words in Amharic she learned at Ethiopian Community in Seattle Culture Camp.  The highlights there for her are special friends and the Ethiopian dancing and food.  Language learning has been more of a struggle.


Her impact in the world is tied up in her identity and ours as a family; all are complex and evolving.  She identifies as fully Ethiopian but also embraces her Dutch and Greek roots – with a particular love of Greek mythology.  She also knows she is fully American.  Being “black” is something she is still wrapping her mind around; she has consistently pointed out she is “brown.”  And she is starting to truly grasp the complexity, pain and disparities in the world, she and we can’t fix.  And I can feel her heart (and mine) breaking a little with each revelation.


However, seeing a woman being appointed President of Ethiopia for the first time, half the Ethiopian cabinet named being women and the head of the Ethiopian Supreme Court being another well qualified woman, gives us both hope.  She has big aspirations and ambitions! She loved the book, “So You Want to be President” but rightly pointed out that all our presidents have been men and all but one white.  Now she has role models that look like grown up versions of my little girl.


I love getting to work with my sweet child and be inspired by her.  My role in her life is changing as she has more thoughts and opinions of her own.  She needs to create an identity different than mine as a unique person but also a person who has a separate history, race, culture and another family.  She has pushed me to re-think and re-consider many beliefs about and approaches to parenting, privilege, and opportunity.  I can only imagine what the next decade will bring.


I love you to Ethiopia and back again my darling daughter.  I know the road ahead may be a bit choppy as you navigate adolescence but we are in this together! 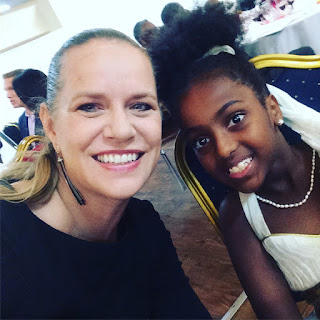