I am late this this post.  I try to get it published on her actual birthday but time slipped.   At least we managed to keep her party on the day she entered this world and made it a little brighter (pictured with her brother Damian). 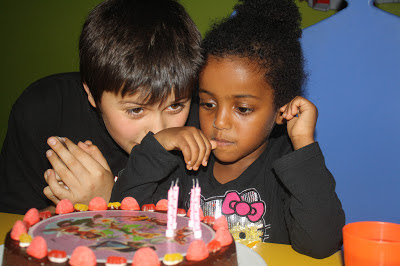 We are at Euro Disney celebrating, her gift.  It is special in so many ways. I remember going to Disney in Florida at the same age as my eldest, who is 16, when my little sister was five, same as Leyla. It brings back poignant memories.  Seeing Leyla's suddenly shy deameanor around some classics, who moments earlier made her squeal with delight when she spotted them, was a sweet surprise. 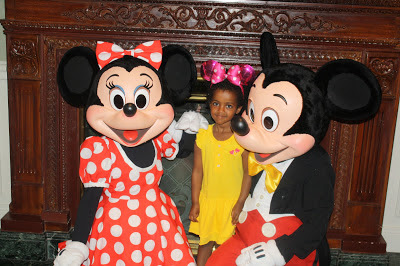 At five, Leyla is beginning to show signs of the lady she will become.  She has opinions about fashion, fairness and speaks basic French perfecting rolling her “r”s  -- something I have never managed which greatly amuses her.  She sings and dances to her own music and can make people smile just by entering a room.  She is inclusive and giving as well as stubborn and sassy.  Her brothers joke she has more friends in their grades than they do.  She is thrilled to be at the same school as they are which, other than the fact they are at a small International School now, would never have been possible.
All the early worries of adoption are gone; although thoughts of its complexity linger.  We know we will journey through uncharted territory at each phase.  But we feel better equipped and know she will help lead us too.  As I contemplated this significant milestone that too many in her birth country don't reach, I heard about two other little girls; each left an indelible impression, as I celebrated with mine.

First, I was looking at my adoption agencies website at children who are waiting – these are the hardest to place because of health, age or sibling status.  I saw one pre-teen girl with an uncanny resemblance, and thought, "She could be Leyla’s older sister." which was unnerving since we don’t know much about her Ethiopian family.  Leyla snuck up behind me silently on kitten’s toes as she often does and saw me looking at this picture.  She asked, “Is she from Ethiopia?  She looks like me.” I told her, “Yes. She is and she is waiting to find her family.”  Leyla emphatically said, “I have a family!” and wandered off to play. I inquired about the girl and found parents had come forward for her who are equipped to deal with her complicated health issues; my heart soared!  I shared with Leyla that the girl who looked like her found a family and I had asked if we could be in touch.  She replied without hesitation, “Great, maybe we can be friends,” for her so simple; for me so beautiful -- family and friendship.
The second girl was an adorable two year old adopted from Ethiopia.  She escaped from her father for a moment , was struck by a car and tragically killed.  From the photos and postings I could feel the grief like a gaping wound of her family and community who couldn't imagine life without her it in.  I also felt the incredible joy and laughter she had spread in her short life .  I found I could not keep her lovely little face out of my thoughts.  I was taken back to when Leyla was two and recalled how much she changed all of our lives even after just her second trip around the sun.  Now three years later, her influence and reach are even greater.    I look forward to seeing her life unfold, and I hope it is a long one.  But even in this first phase, she has left a huge footprint on our hearts with her tiny feet.  Each day is a gift and one I don't take for granted.
I love reading Leyla stories at night before she goes to bed and then tucking her in.  She often wants to comb my hair while I read aloud.  She also frequently asks me to lie down next to her while she begins to slumber.  She knows I often just fall asleep too right there after particularly exhausting days .  As I was laying next to her recently, her little cartoon character voice, with its high pitch but perfect enunciation, cut through the silence with the sweetest words. “You are the bestest mommy ever.  You are always in my dreams.”
Happy Fifth Birthday my bestest daughter!!  You gave the word "family" a bigger, better meaning for us all!  And you are always in my dreams too.
Posted by eangeli at 4:51 AM