We do it for her.  We do it for our amazing daughter.  I didn’t have any meaningful link to Ethiopia before she joined us.  Now it is unimaginable to think our family would not be connected to her birth country.  Last December, we had our second annual event supporting Ethiopia Reads educational and literacy efforts.  The family flew in from Europe, where we now temporarily reside, the day before.  Our second son shows the effects of jet lag at the end of the evening after doing a great job as one of the photographers. 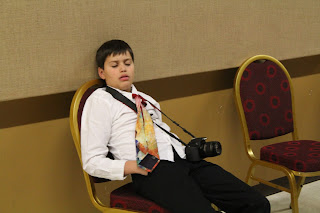 This year for the first time, Leyla said a few words during the appeal after her father spoke.  Her beautiful little voice, often described as sounding like a cartoon character, was clear as a bell.  Her liquid black eyes looked straight into the sea of faces, and she spoke directly into the microphone, “Hi, my name is Leyla Marie Fasika. Please help us build libraries in Ethiopia . . . and schools.  Thank you very much!”  My eyes filled as I held her.  She had one arm wrapped tightly around my neck but her body was otherwise relaxed.  She was not afraid to speak to a crowd of a few hundred.  She knows she was born in Ethiopia and is proud of that fact.  She knows we are working to help kids there and she is starting to appreciate what that really means.  She even refers to this effort as “her event.” 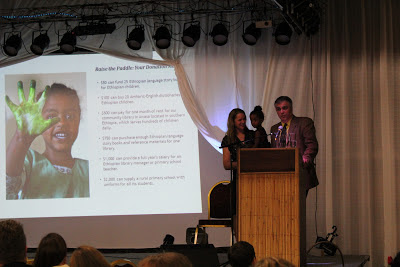 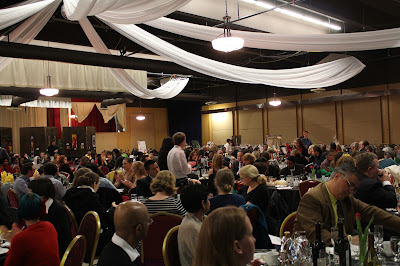 In the frenzy of making it all happen in the months and weeks leading up, I found little time for reflection and contemplation.  Too often I needed to focus on the act of doing – list making, following up, problem solving – trying not to miss anything.  I volunteer on the side while my a full time job and my roles as wife and mother of three taking up most of my time.  Hearing her speak and play a real part this year was indescribably beautiful.  And it provided me a priceless reminder of the “why.”

A few weeks earlier, I was working on videos we were to show.  One was to share what we had accomplished the previous year with the funds raised in our first event:

And one was to illustrate what we wanted to make possible this year:

I found myself with tears streaming down my cheeks each time I reviewed them.  Something about the perfect soundtrack and the joy and resilience of those children against the backdrop of what they were up against broke my heart and inspired my soul simultaneously and inexplicably.  Joy shining through the hardship; hope found despite deprivation; dreams growing out of gaping need.   I have no words to explain it but I could see my daughter in each of their faces.  And their futures, which deserved the opportunity to blossom, were no less precious than hers.

When toward the end of the evening, our guests gave me a standing ovation. I was completely shocked and overwhelmed.  I am a shy, private person by nature and quite comfortable in the background.  To see hundreds of faces from many parts of the Seattle community and beyond standing gave me an inkling I was not alone in feeling moved by what we were accomplishing by coming together.

A terrific group of supporters and volunteers, some at the event and many more who helped in so many diverse ways, enabled us to again exceed our ambitious goals -- 3X our first time.  In the process, our family and friends and community celebrated being a part of something bigger . . . something global.  And I came away with many new or deeper Ethiopian Ties and a renewed sense of the promise for the future the bright eyes of inquisitive, intelligent youngsters of this East African nation represent. 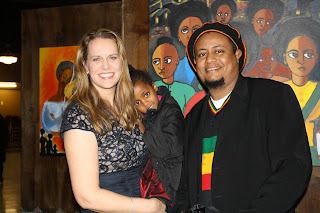 Yaddi and I (taken here by my son in front of his amazing painting for this year's event) came up with the event name Open Hearts, BigDreams in 2011. The name continues to be as fitting now as it was when we began.  Thank you to everyone who helped make it a success again.  The standing ovation is for all of you.

As Federick B. Douglass said so well."Once you learn to read, you will be forever free."
Posted by eangeli at 6:32 AM

Check out my about.me profile!

YEA! Thanks for making us the #4 Adoption Blog by Parents on CircleofMoms.com !! 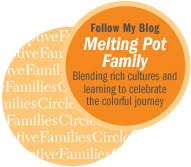 eangeli
I am a happily married, working mom with three kids - two boys, 19 and 15 years old, and one girl, 8 years old. My daughter is Ethiopian. I want to help raise awareness of the challenges and beauty in that country as well as the opportunities available to be part of the solution. And I want to share what I learn as I work to balance motherhood with career while trying to make a bigger contribution. I also blog at adoptivefamiliescircle.com - look for "Melting Pot Family" and at workingmother.com/momblog - look for "Mom, Mayhem, Missions and More".

Great Books with an Ethiopian Connection